Almost thirty years ago, when I was a teenager, a friend gave me a meditation bench. It was collapsible, made of soft pine, and stained chestnut. It probably cost less than five bucks to make, but it’s turned out to be one of the most valuable things I’ve ever owned. 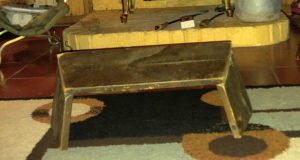 I received this bench from Ken Schiff, author of the novel Passing Go–a finalist for the National Book Award–and founder of the Mercyhurst College Summer Writers’ Institute in Erie, PA, which ran through the late 1980s and early 1990s. I attended the Institute in 1988, when I was 17. Ken was the first real-life novelist I’d ever met, and a deeply kind man. His encouragement of my writing habit meant a great deal to me.

Ken was also a practitioner of Zen Buddhist meditation. I had a strong interest in attaining some level of inner peace, because in my late teens I didn’t have any. Meditation helped a great deal. Sitting quietly for a few minutes a day, focusing on my breath, gradually quieted my mind. It didn’t solve my problems, but it certainly made them easier to deal with.

I developed an attachment to this bench, even though my meditation practice has always been sporadic at best. I took it with me when I left Erie for Boston, and then when I moved to Santa Fe, New Mexico, and then to California, and then back to New Mexico, then back to Erie, then to Brooklyn, then to Toronto, and finally to Nova Scotia, where I seem to have come to roost.

I have a daughter who’s just entered adolescence, and is finding the path a bit rocky, as most of us do in some way. Even though she’s several years younger than I was when I started meditating, I realized the other day that she was probably ready to begin a practice of her own. I decided to give her the bench. As I handed it to her, I realized something:

If Ken hadn’t given me that bench, I might not have continued my interest in Zen.

If not for my interest in Zen, I likely wouldn’t have taken up the practice of karate in my early twenties.

If not for karate, I likely would never have developed the focus and discipline required to finish my first novel.

If I hadn’t written that book, I never would have moved to New York.

If I hadn’t moved to New York, I never would have met my wife.

If I hadn’t met my wife, my daughter would not exist.

So, as I handed it to her, I told her that this humble little meditation bench was the reason for her existence.

She smiled. She liked that a lot. I was glad she was smiling. It’d been a few weeks since she’d done so.

And then she knelt down on it and started meditating.