This past Friday, at about 5:30 am, I was gassing up the Honda at the local Irving station when I bumped into a fellow I know who sits on the town council of Mahone Bay (pop. 986), where I live. I’ll call him C. After exchanging the obligatory commiserations about being awake at that hour, we each inquired as to the other’s business abroad in the pre-dawn darkness. I was going to my contract job in Halifax, about an hour away, I said. C. was on his way to the grand opening of a wind farm up in the Valley. When I asked what he had to do with a wind farm up in the Valley, he looked at me as if I had perhaps just crawled out from under a rock, and said that the project the town had been working on for the past ten years, that of providing its own energy through renewable resources, had finally borne fruit. Today was the day Mahone Bay stops buying electricity from Nova Scotia Power (NSP) and starts making its own at the Ellershouse Wind Farm.

I was dumbfounded, for I had heard nothing about it. I like to consider myself a fairly well-informed guy, so it was embarrassing to realize I was clueless about something so momentous taking place in my own back yard. (Ask me anything about the chronology of World War II, though!)

I was also delighted. I knew that Mahone Bay had its own power utility, but that had never made sense to me, because it seemed like the utility really only functioned as a middleman. NSP sold power to the town, and the town turned around and sold it to the people. It wasn’t really about making money–I don’t mean to imply that there was any kind of greedy markup–but all the same, the existence of the utility seemed extraneous and redundant to me, an admittedly uninformed citizen.

Now, however, it made sense. Having our own utility is what allows us to connect to the wind farm power supply directly. This must have been the town’s long-term goal when the utility was built. And our rates will be going down, which is great news.

But there are some other very good reasons to be happy about this besides money. Nova Scotia Power has a monopoly in this province. While the service they provide is more or less reliable, their rates creep up every year, and it bothers everyone that there is no competition. The power in Nova Scotia used to be provided by a Crown corporation, which was sold in 1992 because the province was in debt; NSP is therefore a privately-owned corporation that is regulated by the provincial government. This is an arrangement that naturally raises some eyebrows, since no one is really sure who is the dog and who is the master. And, most importantly, NSP produces the majority of its power by burning coal–very dirty coal, some say. Wind power produces no pollution. Brilliant.

The only thing I like more than clean energy is clean energy that we provide ourselves. I don’t know if the wind farm is going to be more reliable overall, but there is no reason to believe it won’t be, and I am always in favor of more self-sufficiency.

There is another, even more compelling, reason I’m happy about this arrangement, though. Perhaps by coincidence (although there really are no coincidences, are there?) I came across an article on the very same day in The Coast, called “Nova Scotia Power’s coal is drenched in blood.” A Colombian lawyer and activist named Francisco Ramirez Cuellar was in Halifax to talk about the fact that NSP buys a great deal of its coal from Drummond Coal, a giant mining company that according to Cuellar is directly or indirectly responsible for hundreds of disappearances, thousands of deaths, and tens of thousands of displaced families. 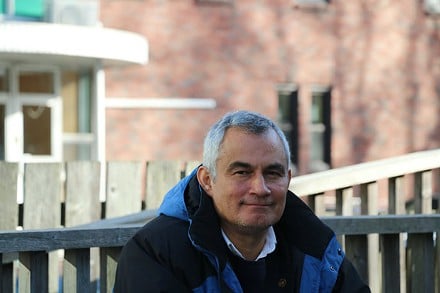 Canada has a very dark history of abetting morally bankrupt mining companies in other nations, but that’s the topic of another post. For now, I would suggest that every Nova Scotian, and everyone who is concerned with the generation of clean renewable power, take a moment to learn about the Ellershouse Wind Farm and the Drummond Mining Corp. Even if you don’t buy power from NSP, it’s always instructive to see how people in poorer countries suffer so that we can live our more privileged lives. (Like the Chinese slaves who made your smartphone or your tablet, or the African child slaves who harvested your chocolate, or the people in Central America who are paid practically nothing so that you can have coffee.)

I have always loved this town, but I feel especially proud to be a citizen of Mahone Bay right now. I hope that other towns and municipalities will follow suit. The more of us who are getting our energy from wind, sun, and tide, the better. Everyone in North America should be watching what’s happening in Nova Scotia right now. If we can do it, so can you.