If you’re an American thinking of moving to Canada in the event of a Trump election, here are a few items of knowledge that are impractical but insightful (which seems to describe most of the knowledge I possess). But first, a bit of background on why I am uniquely qualified to counsel you on this important life decision.

Growing up as an American, I distinctly recall feeling sorry for anyone who wasn’t also an American. It was an outrageous bias, but I came by it honestly; throughout my childhood, I was told repeatedly by members of my grandparents’ generation just how good I had it, and how lucky I was that I hadn’t been born in some other place–or, worse yet, in a different time, before anything interesting had been invented and when people dropped dead constantly from random causes. Whew! Close one, I often thought. I imagined that souls were parcelled out to babies as they were being delivered, and that I had won some kind of soul lottery simply by falling into the right body at the opportune moment.

I felt especially sorry for Canadians. From my home town of Erie, PA, one could occasionally see Canada across the lake, if one was on a high piece of ground and the day was clear. To come so close, and yet to be so far away! Them, I mean, not us. We had nothing to be sorry about. They had only gotten six out of seven numbers on the soul lottery. Sure, they walked and talked and looked pretty much the same as us, and they drove across the border any time they felt like it to go shopping, and they had televisions and BB-guns and Atari systems (so went my childish line of reasoning). They also had Marineland Niagara, which boasted a rope walk and a giant ball pit. My aunt and uncle took me there one day for a visit while I was staying with them in Buffalo, just across the Niagara River. It seemed like things in Canada were just great, except for one thing: they would never know that special sensation of total, smug superiority that was America’s by birthright. 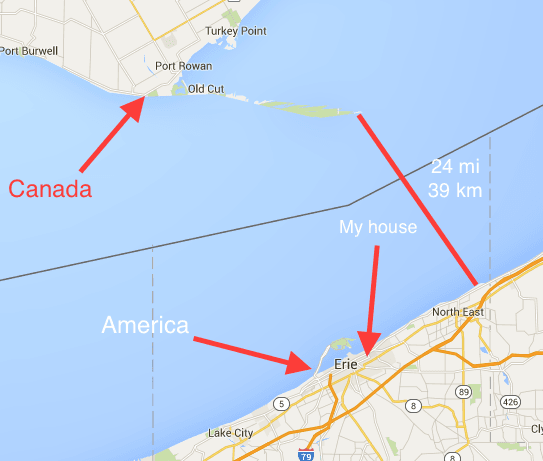 It will be sixteen years this summer since I moved to Canada, for perhaps the most honest reason of them all: I fell in love with a Canadian woman. Since then, I have made numerous observations about the Canadians, which I will gladly share with my fellow Americans here, in order to spare you the inconvenience of traveling to find out for yourselves. The main point of my investigation has been this: how do Canadians really feel about America?

You should know, first of all, that Canada is really two countries, one French and one English. They live side by side in an approximation of a fairly stable chemical bond, except that English people seem pretty casual about their Englishness, while French people are deadly serious about being French. I would put this down to the sensitivity that often comes with minority status, but I have observed that the French in actual France are even more serious about their Frenchness, and they can hardly be called a minority there, can they? So, I conclude that it’s some sort of cultural trait–one which Americans probably inherited from the French, come to think of it, just as we inherited from them a rather large amount of our vocabulary, and our Englightenment-era ideas about freedom and democracy. Come to think of it, if we Americans are too grandiose and full of ourselves, it’s at least partly France’s fault. (I hadn’t intended to bring France into this, but perhaps it’s time they were held to account.)

Canadians feel a wary fondness for Americans. They would like to be better friends, but we make it awfully difficult. Remember that smugness I mentioned? Turns out that’s a bit of a sticking point in our relationship, as it would be in any relationship. Yes, they know America has ten times the population of Canada, and that our army is seriously large, and that our economy is unfathomably wealthy. We don’t need to point these things out to them every time we have a conversation. It’s all been well established by now. Thank you. Can we move on?

I have also noticed that sometimes this wary fondness gives way to astonished horror, the way you might feel about a stupendously drunk person who is making a spectacle of herself at a wedding reception, say–especially when we do things like make up phoney reasons to invade Iraq, or accuse our own president of not even being a real American, or seriously entertain the notion of making Donald Trump the Republican presidential candidate. Yes, Canadians know not all Americans are this out to lunch. But why, they would like to know, do the people who think this way have such a strong voice in our national affairs? It’s a good question. I have no answer for it, except to say: it’s because of democracy. Which we got because of the Enlightenment, which started mostly in France. So, it’s France’s fault again.

In fact, let’s extend the drunken wedding guest metaphor so that she is not just a random person, but your best friend. Your best friend is not only drunk, but she is also being obscenely loud, and she has a piece of salad stuck between her teeth. Oh, and she is brandishing a loaded automatic assault rifle, and she doesn’t even realize her dress strap has broken and one of her boobs is hanging out. There is the same cringing sense of vicarious embarrassment, coupled with the fear for one’s life, that one always gets in that situation. That’s how Canada feels about America. “Psst! You’re about to elect another war-mongering greedster,” Canada would like to whisper in our ear, as if we would gladly correct ourselves if only we were made aware of the problem–the way this drunk best friend might surreptitiously tuck herself back into her brassiere, once you had pointed out to her what was happening. Alas, it seems too many of us prefer to prance about drunkenly with our political boobs hanging out, to coin a horribly awkward phrase that will probably make no sense at all, but which I’m leaving in anyway.

It is said that history is written by the winners, but the lesser-known corollary is that history is studied by the losers. (Losers, by the way, is a term that Americans like Donald Trump often use to mean “everyone who isn’t an American.”) Americans don’t have to study history, Donald Trump might say–they make it. We do study our own history, of course. Most of that consists of learning about how fantastic it is that our nation exists and how lucky we are to live in it. But we do not learn a blessed thing about Canada, as far as I can recall. Not so much as a pop quiz. I mean, who cares? We knew the stereotypes about Mounties and igloos, and that was enough. Meanwhile, my Ontario-born wife had to learn all the state capitals and master a general course on American history, with the result that she knows as much as I do about my own country, while I cannot make the same claim about hers. I had to learn a bunch of that stuff to get my Canadian citizenship, but I was forced to forget it shortly afterward when I learned something else, and now it’s gone forever.

I have greatly enjoyed my sojourn among the Canadians, so much so that I have no plans to leave any time soon. I encourage my American friends to learn more about our northern neighbors. Many of you have said you would like to move here if Donald Trump gets elected. There is an easier course of action, which is not to elect him in the first place–but that would require participating in a democracy, and we have seen where that gets us. (Thanks a lot, France.) Canada is a great country, and you will be quite happy here, but I would just like to advise you to re-read the paragraph where I talk about how it’s not necessary to constantly remind Canadians how great America is. If you can just remember that, and maybe take the time to learn a little Canadian history–and if you are willing to leave your AK-47 on the other side of the border–we will all get along just fine.

9 thoughts on “In the Shadow of the Beaver”