When I was in high school, back in the late 1980s, I used to feel contempt for the guys who skipped school to go deer hunting every year. Though I didn’t say anything to their faces, privately I thought they were stupid and backwards. Of course, I’d also grown up in the suburbs, where meat was readily available from the supermarket any time we wanted it–and where, like all other suburbanites, we were utterly disconnected from the source of our food, as well as from the outdoors.

And, like many teenagers, I was something of an idiot. But let’s not dwell on that.

Something happened to me when I moved to Nova Scotia. I rediscovered a love for the outdoors that I used to have when I was very young. I started fishing again, an activity I hadn’t pursued since I was ten or eleven. And I began to get the urge to kill a deer.

This was surprising at first, but I know where it came from. It’s not complicated. Inside most men there survives an instinct to provide food for their families. If a man is removed from the unnatural world of offices and traffic jams and put outdoors, he will immediately begin to recover this instinct. Most of us have forgotten the ancient skills our ancestors knew. But we can get them back. And I think it’s important that we do.

You don’t have to kill a deer, of course. You don’t have to kill anything. I get the same satisfaction from harvesting food out of my garden as I do from hunting. But hunting is about the most primal expression of that urge. And I think if a person is going to eat meat, they have a responsibility to do so as ethically and cleanly as possible. It’s not just about the locavore trend of following the path your food takes from forest to table. It has some sort of healthy effect on the mind and the spirit to bring your food home on your shoulders, whether it be from the woods or the garden. And for a father there is really nothing more satisfying than feeding his wife and children.

At the age of 43, I’m much older than most hunters when they kill their first deer. I started deer hunting several years ago, but like most newbs, I wasn’t very good at it. Every hunter needs a mentor. I’ve been fortunate enough to have three. The first, an old woodsman by the name of Paul MacDonald, took me out a few times and taught me quite a bit, but we never saw any deer–certainly my fault, not his. The second, a guy I’ll call E., has been hunting the woods in this area since he was a child, and was kind enough to show me around his territory. The third is my duck-hunting buddy K., who has also been at it a lot longer than I have, and who came out with me last Saturday to sit in the blind and teach me more about what I was doing wrong. In a nutshell, I was spreading my scent around and moving around too much. Once we got these issues under control, everything changed.

It was about four o’clock on Saturday afternoon when four does stepped out of the woods and began to make their way along the edge of the trees in front of us. We were about eighty yards away. The moment of truth had arrived. Weeks of preparation, and years of hope, all came down to a single instant. I was nervous as hell about missing my shot.

I use a .303-calibre Lee Enfield, a beautiful old rifle that was made in Australia in 1940 and likely saw service during the war. I’d had it out to the range to test it, and to test myself, but it had been a while, and my heart was pounding with excitement. I followed all the rules I’d been practicing in my head–bring the stock up to my cheek, breathe slowly, squeeze the trigger when the breath is halfway out. I didn’t even hear the gun or feel the kick when it went off. Every fiber of my being was focused on that deer.

She fell like she’d been clobbered by a dump truck, and she didn’t get up. I could hardly believe my eyes. I’d been expecting her to run at least some way, as I’d heard they often do. Later, when we were cleaning her, I realized her spine had been severed by my shot. It was a perfect kill. She felt no pain and no fear. She never knew what hit her.

“Well done, Bill,” K said. That’s about as high as his praise-o-meter goes. I was vastly relieved. I knew my worst fear, that of messing everything up and chasing a wounded deer for hours through the undergrowth, possibly even losing her altogether, was not going to come to pass.

When we buy meat at the supermarket, we’re eating the flesh of an animal that was raised in an artificial and fear-ridden environment. They live their whole lives in a pen, and I believe on some level they know they’re destined for the slaughterhouse. Animals learn from each other, so cattle certainly pass on their fear. This affects their flavor, and some believe it even affects us on some vibrational level–that eating fear-meat is deeply unhealthy for us, that the fear is passed on somehow.

Even if you don’t believe that, a compassionate person will always treat animals kindly rather than cruelly. And while some may see a dichotomy between hunting for food and being kind to animals, hunters are some of the most sensitive, compassionate, conservation-minded people I know. We would much rather see animals living natural lives right up until the very end. And let me be clear–I hunt for food, not for sport. I eat everything I kill, whether it be rabbit, duck, fish, or deer. If I’m not going to eat it, I don’t kill it. I have no respect for pure trophy hunters. You are not a better person because you killed a big animal. If you waited extra-long for the buck with the big rack to walk out, great. But you’d better eat every bite of him.

This doe spent her whole life in the woods, eating natural food and doing the things a deer does day in and day out. K. estimated she was three or four years old. We gutted her there in the woods, then slung her on a pole and carried her out. Currently she’s hanging in K’s barn, where she will age for two weeks, then be taken to the butcher’s. And the seventy or eighty pounds of meat she’ll yield will feed my family all winter.

For that, and for giving me her life, and for everything else, too, I thank her. 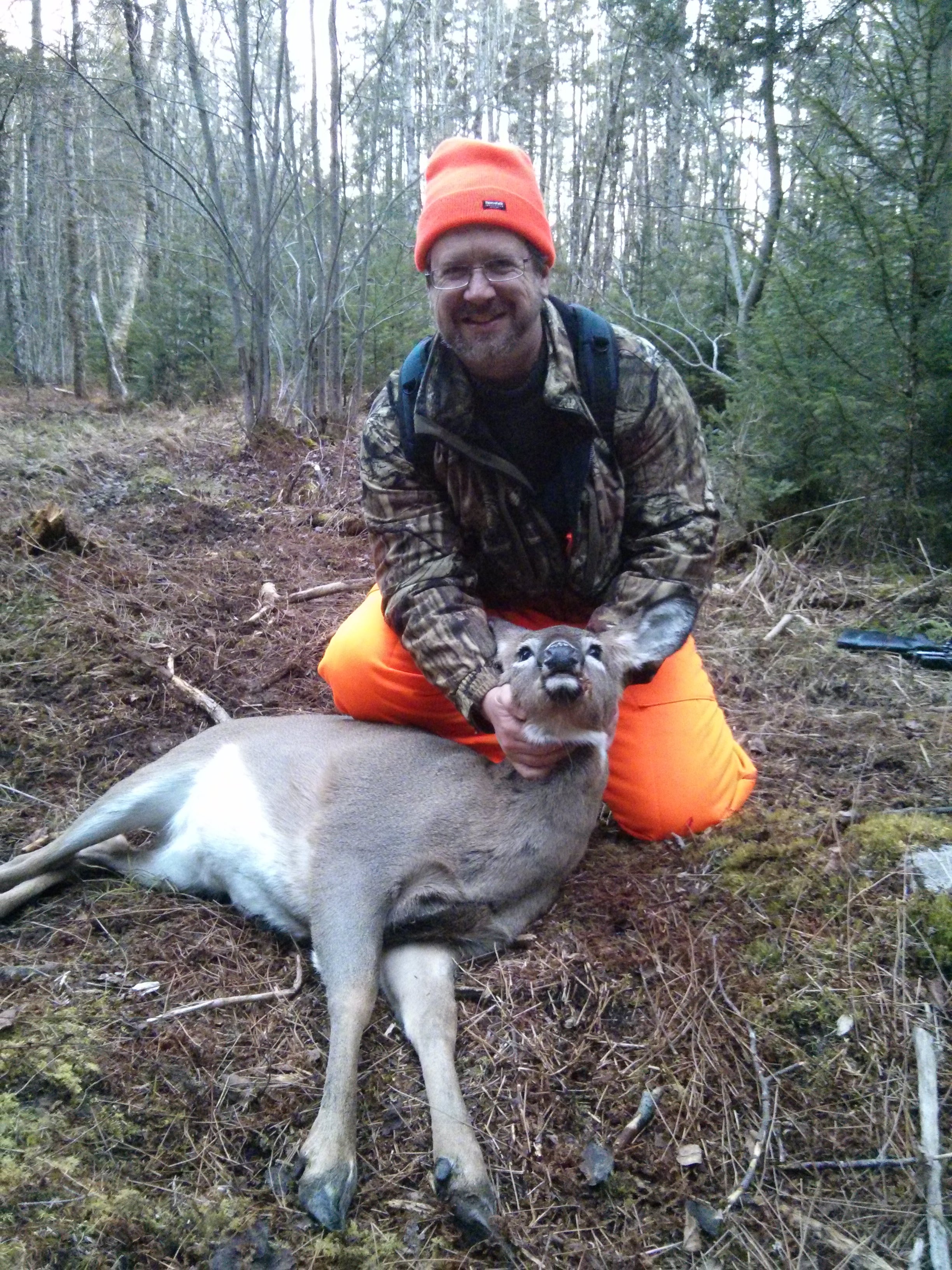 1 thought on “My first deer”