“Instead of clearing his own heart, the zealot tries to clear the world.”

In the past few weeks, the pendulum swing of political correctness–a movement that began decades ago as a backlash against entrenched prejudice and general power-hogging–seems to have achieved a sort of terminal velocity on American university campuses. This has resulted in events that many find dismaying, but not terribly surprising. I’m referring specifically to two well-known incidents that have already been heavily commented upon: the fight over Halloween costumes at Yale, in which a professor named Erika Christakis was pilloried for suggesting that students should be encouraged to use their own best judgment about what kinds of costumes are offensive, and the protests at the University of Missouri, during which a communications professor encouraged students to deny media access to their safe space–and to the very event that was designed to draw attention to their cause.

On both campuses, the idea of a “safe space” for students is generating the most discussion. It’s an idea that intrigues me, if only because it would never have survived a moment at my alma mater, St. John’s College.

On the outside, St. John’s looks about as safe as any space can be. It nestles in the foothills of the Sangre de Cristo mountains of northern New Mexico, surrounded by piñons and cedars, ten-thousand-foot mountain peaks, and vast amounts of wilderness. On clear days, the sky is so crystalline that it seems one can see straight into space. It’s quiet, peaceful, and stunningly beautiful. 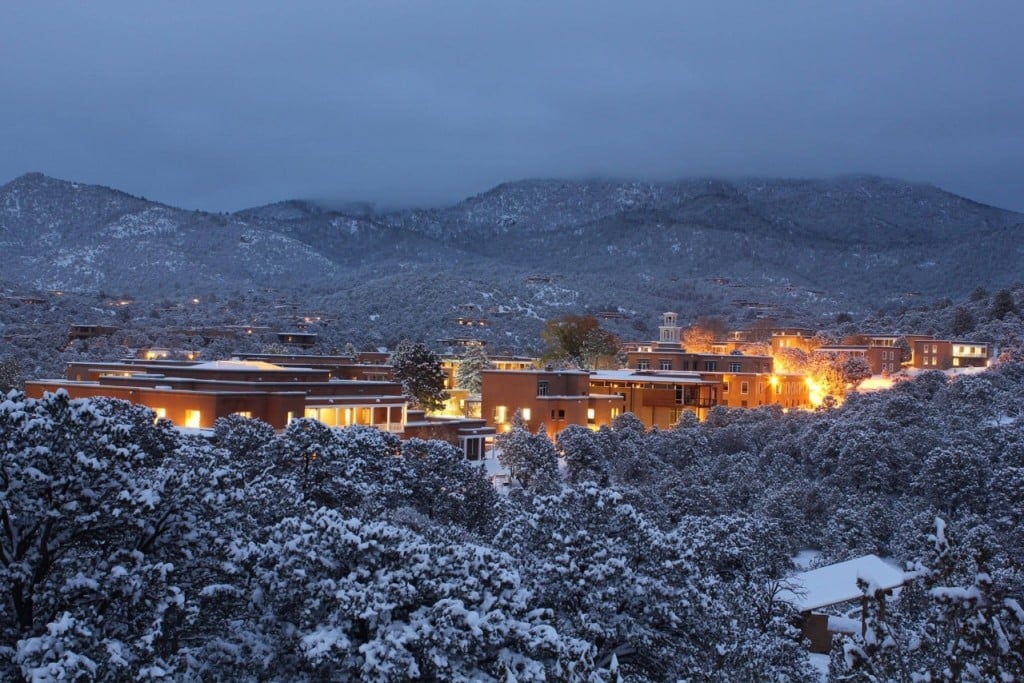 St. John’s is a Great Books school, and it’s a curious mixture of a Very Safe Space and a completely un-“safe space”. It was a Very Safe Space in the sense that you could explore, out loud and in great depth, pretty much any idea you could think of, in one of the two-hour philosophy seminars on seminal works of Western Civilization that are held each week, or in any of the required tutorials in language, mathematics, the sciences, art, and music. It is an environment totally dedicated to nurturing intellectual curiosity, problem-solving, and general growth. I had never before, and have never since, encountered so many brilliant people in one place. Because it is a Liberal Arts college in the truest sense of the phrase, we all had to take every course on the syllabus, in every subject. And because our sources were not textbooks, but original sources–think Einstein, Newton, Galileo, Kepler, Freud, Euclid, Hegel, Kant–we were, all of us, pushed well beyond any concept of a comfort zone we might have had, and out onto the heaving ocean of our ignorance, which was where I seemed to spend most of my time. It’s not until one has delved deep into conversation with the authors of the Great Books, and with one or two dozen other hungry minds, that one realizes how very little one actually knows about anything. One needs a sense of safety just to inhabit that place for any length of time, and to navigate the feeling of instability that comes with balancing on something no more substantial than the head of a pin, until the ground grows slightly more substantial and ones’ footing becomes more assured.

Socially, also, it was a highly tolerant environment. Of course, that is relative to my own experience. I came from a conservative-leaning Midwestern town where people didn’t even know males could wear earrings until they saw it done on MTV. At St. John’s, you could be as awkward, weird, or avant-garde as you liked without worrying for a moment that anyone would make fun of you. Your garden-variety prejudices against race, gender, and sexual orientation didn’t stand a chance there; they, along with all other forms of irrational thought, were usually annihilated in short order by the cold light of reason. At least, that was how I, as a straight white male, perceived it to be. Certainly others would have had a different experience, experience being the subjective thing that it is, but coming from where I came from, it seemed like a place where a person could explore nearly any manner of being, from mildly nerdy to flamboyantly gay, without having to worry about being teased, excoriated, excommunicated, or beaten up.

St. John’s was also completely un-“safe” in the current, popular sense of the word–which as far as I can tell seems to mean whenever someone utters a statement someone else finds objectionable. This may take a bit of explaining.

St. John’s is a discussion-based education. We are never lectured to. Instead, we engage each other in conversation on every one of the hundred or so books we read over the course of four years, in every subject. Our professors, whom we call tutors, are not there to lecture. Their job is to guide us along as best as possible, and to gently correct the conversation if it goes off the rails. It often did go off the rails in the first couple of years, but it happened less and less, until, after four years of intensive practice, most of us were able–wonder of wonders–to hold a coherent, focused, two-hour conversation on topics such as what makes a good person, what is a just state, and what Kant meant by a priori knowledge (to name just three of an infinite number of topics).

The purpose of this was to get us to form our own understanding of complex subjects–the most complex of which was ultimately our own selves. It was a lot of reading and a lot of talking. When you spoke, you were guaranteed a respectful audience. If you said something that was poorly thought out, you were going to be challenged on it immediately. Not by the administration, or by the faculty, but by your peers. Furthermore, you were expected to listen respectfully to other viewpoints, some of which you might have found odious at first, but which you might have found yourself agreeing with after a while, to your great surprise–which was, after all, the point of the whole undertaking: not to reinforce the things you already believed, but to find the holes in your system, and either make the necessary repairs or tear the whole rickety structure down and begin again.

For me, the latter was the necessary course, and for that reason St. John’s was a perilous undertaking. The hardest part about this process for me was the act of tearing down the false edifice of my persona, which I had spent years trying to construct simply because I had no understanding of who I was and knew no other way of being. I did not understand that all the things I had sought so desperately as a youth–understanding, knowledge, wisdom, experience, inner peace, even success–were to be mine for the taking as soon as I stopped looking for them outside myself, and accepted that the potential for these things already lay within me.

That may sound like an ideal outcome, but the tearing-down part was painful beyond words, and it led to a sort of breakdown in my junior year, during which I became convinced that there was really nothing about me, or my existence, or existence in general, that was true. This wasn’t actually nihilism, but a kind of spiritual rebirth. Upon that foundation–the understanding that I am just a jot in the universe, that we are each of us equally as important as the other, that the notions of right and just and good are almost entirely relative and have no real meaning, and yet there is nothing more important than seeking answers, learning acceptance, and fighting as hard as you can for what you believe in–I allowed a new notion of my self to begin to form. This is not a solid, unchanging self, but a consciousness who accepts that the Self is fluid, ever-changing, and imperfect, and who has the courage to accept it– on most days, anyway. It was very painful, it was frightening, and it was the greatest gift I’ve ever accepted.

None of this would have happened for me if I had been ensconced in a safe space, protected from ideas I found threatening.

The notion of a space in which university children need to be protected from ideas they don’t like is abhorrent to many of us for many reasons. For me, it’s upsetting because it makes a joke of our national method of education, which is not now, and has not been for a very long time, a truly educational system. * To educate means to lead out. It also means to discipline the mind to recognize bullshit from truth, to have the courage to speak truth to power, to root out intellectual dishonesty in oneself and replace it with humility and openness. It should not mean a four-year nursery school where nobody has to encounter ideas they don’t like. Nothing speaks louder to the fact that critical thinking is dead in America than what is happening at Yale right now.

The hardest thing for me since leaving St. John’s has been having to deal with people who are threatened by asking questions. I have always been an inveterate questioner of everything, not out of rebellion but out of an insatiable desire to know everything I possibly can. A Johnny soon learns, upon graduating, and to his great sadness, that many people are unnerved by this, and that they do not even know how to have a conversation about ideas. You will see this on internet discussion boards all the time. There, people seem to think that discussion involves two people simply presenting their points of view, often with contempt and invective, and then totting up the score later. Most likely, each will come away privately thinking the other an idiot and himself the victor.

I am not one to criticize those who find it frightening to have the intellectual ground yanked away from under one’s feet. I know first-hand how difficult it is to realize the things you “believe” are actually without foundation until they are examined, parsed, and tested. But this is what universities are supposed to be for. They are not–again, this has already been heavily written about and commented upon–for protecting and coddling. I was fortunate enough to spend four years in a place that to many might sound like a paradise, but which was actually a relentless testing chamber. As long as our students are lectured to instead of conversed with, as long as they are forced to digest packaged textbook versions of ideas instead of original sources, as long as they are told that true strength means clinging to one’s ideas rather than examining and questioning them, and–most of all–as long as they are allowed to resist solving problems for themselves, the pursuit of true understanding may be safely said to be gone in America. It is that concept, and no other, for which we should be providing a safe space. Everything else is wind.

*This is wrong, as it turns out. A couple of readers have pointed out that educate comes from e ‘out’ + ducere ‘lead’: ‘to lead out.’

11 thoughts on “The dangers of safe spaces”