This article was first printed in The Writer magazine in June 2006.

This is the strange tale of how I transformed a messy manuscript that wasn’t working into a coming-of-age novel called Eddie’s Bastard, which in 1998 was bought by the lovely and highly talented editor Marjorie Braman at HarperCollins, Inc., was selected for the Barnes and Noble Discover Great New Authors program in 1999, was eventually translated into fourteen languages, and won South Africa’s 2001 Exclusive Books Boeke Award, among other accomplishments.

In the autumn of 1996, when I was twenty-six years old and working as a teacher in Albuquerque, New Mexico, I was well into writing something that would have looked to the rest of the world like a garbled long-short-story-cum-novella–if, that is, I’d dared to show it to anyone–but that I knew in my heart of hearts was actually an embryonic novel.

Unfortunately, it didn’t look like I would carry this baby to term. The manuscript was a mess. Various narrators made spontaneous appearances– some from the present day, others from two hundred years in the past, some speaking in the first person, others in the second. They fought for dominance, and all seemed to present equally-weighted arguments for which of them should be boss. I had a vague idea of the plot, but since this was my first attempt at writing a book, I didn’t even know whether I should create an outline or just let the story evolve naturally, without constraining its growth. And when it came to organizing various other elements of the story, as in most areas of my life (you ought to see my closet), I was hopelessly lost. I was, in short, a victim of every malady that can befall a young writer who knows he has what it takes to make it, but is mired in ignorance, inexperience, self-doubt, and insecurity, and is desperate to find a way out.

I did have one thing going for me: a mentor. 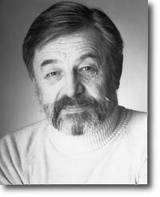 Jack Kuniczak. Hello, ladies! The line forms to the right.

W.S. “Jack” Kuniczak was a writer of the old school, a hard-living, damn-the-torpedoes ex-soldier with the courtly manners of a European aristocrat and the rugged individualism of an American mountain man. Jack seemed to believe that novelists are born as ordained members of the sacred cult of the word. I was down with that. I’d met him when I was a seventeen-year-old student at a writing workshop, when he was writer-in-residence and I was still young enough to believe that actual published novelists were sanctified beings. I’d been impressed for many reasons: he’d written many books; he had multiple ex-wives; he’d survived two wars; he’d been imprisoned in a dungeon in Turkey for smuggling hashish (or so he said, anyway–most of Jack’s autobiographical anecdotes had the convenient quality of being unverifiable.) Just nine years old when Germany invaded his native Poland, Jack had fled with his mother and sister, first to the U.K., then to the States, eventually earning his citizenship by serving with the U.S. Army during the Korean War. Forty years my senior, Jack had taken a paternal interest in me. After that summer, we’d corresponded for a time, but by 1996 we’d been out of touch for several years. Now, up to my waist in crumpled pages, and with my head full of misplaced plot points, I decided to track him down and get his opinion on the matter.

I was nervous about asking Jack to read my work. I wasn’t even sure he’d remember me. But he did, and he graciously agreed to torture himself by wading through my stack of half-typed, half-handwritten pages that were decorated with coffee rings and written expostulations to myself. I awaited his verdict anxiously, knowing already that I was guilty–but of what?

Amateurism, as it turned out. Jack’s opinion was that writers who spend two or three years slogging through a novel without a clear sense of direction are just wasting their time. He hinted, not so subtly, that I needed to straighten things out without delay, or I would never finish the book.

But how do I know what’s going to happen next? I protested. I always had one of two problems: either too many ideas, or not enough. Why, I asked Jack, can’t I just let it all come out, and do some cutting-and-pasting later?

When his eyes had finished rolling in his head, Jack gave me a piece of advice that has served me extremely well ever since: Always Return To The Right Foot.

This seemingly cryptic axiom will make sense if you’ve ever been in the military. As Jack explained it, when the command “At ease!” is given, a soldier is free to do anything he likes: slouch, pivot, yawn, sneeze, play air guitar. But his right foot must never, ever leave the ground. That way, when “Attention!” is barked, he hasn’t gone anywhere; he’s already where he needs to be, and all he must do is pull the rest of his limbs into place.

The plot of a novel, Jack told me, is that right foot. A novelist is free to meander off in any number of directions as he wends his way along the arc of his story, pausing to smell this flower, to examine that dilapidated mansion, to chat with the locals, to dig up an old family skeleton or two. Yet in order to avoid the danger of losing direction, he must, sooner or later, come back to that right foot: that part of the narrative that sustains the reader’s interest, that satisfies us and keeps the pages turning, that answers the all-important question of And then what happened?

Armed with this new outlook on my emerging craft, I went back to the beginning of my story and began to do some serious weeding. Out went the second-person narrative voices. Historical passages fell into their proper places. Since I was not actually writing a historical novel, I realized that the role of the past could only ever be to inform the action of the moment, to deepen our understanding of what was happening.

And, finally, I had a strong voice, and a clear idea of where things were going. The narrator of my novel was being born before my eyes, crawling inch by inch out of the chthonian muck of my unconscious mind. He was a familiar stranger to me, someone I’d never seen before but who I knew intimately. (Many years later, I would have the same eerie feeling of recognition at the birth of our first child.) The more I quieted myself and learned to listen to what he was saying, the stronger he became, until one day, to my gratification, he took over telling the tale, and I merely became the scribe.

I wasn’t done yet, not by a long shot. Over the next year and a half, I rewrote the thing a few more times. I had already written several drafts, but now I had a sense of purpose I’d never had before, plus a guiding principle: Always Return To The Right Foot. The importance of having this beacon in front of me, this pillar of fire in the sky to show me the way as I wandered through the desert, is hard to overstate.

The Right-Foot Rule brought me to a new understanding of something else, too. I realized that just because an idea occurred to me didn’t mean it belonged in the story. It’s too easy for us writers to fall in love with our own brilliance. We get carried away with our status of self-appointed god. Sometimes we don’t need to be lifted up. We need to be beaten into submission. That’s why we need mentors and editors.

Using my new-found law, I was able to make editorial decisions with a kind of ruthlessness I’d never possessed before. Previously, I’d often become paralyzed by indecision. An idea would come, I would dutifully develop it, and it would grow in importance and significance, until finally it threatened to take over–first the whole chapter, then the whole book. The question I was always asking myself was: how do I know that this new thread isn’t what the book is really about? Maybe all the work I’ve done before was just a warm-up, and only now am I coming to the real story!

Such doubts were more easily alleviated–I don’t say eliminated–by the Right-Foot Rule. With my narrator’s voice ringing like a bell in my head, and a clear beginning to the story, I now knew that anything that led us too far away from that original thread, or dawdled too long in one digression or another, did not fit and had to go. I discovered deep satisfaction in such merciless excision. I began to understand what Michelangelo meant when he said that to make a sculpture, he started with a block of marble and then simply chipped away every piece that didn’t look like his subject.

Of course, I would worry, from time to time, whether my original idea was good enough to sustain an entire novel. But I also knew that the book had to be about something–that I would eventually have to find a storyline and stick to it, developing it more and more until it sang like the birds in the trees. Most storylines don’t sound like anything special when you simply explain them to someone, just as most song lyrics look incredibly banal on the page, but somehow become harmonious and rhythmic when sung to music. It’s first of all in the polishing, and second of all in the storytelling, that the real art comes out. This was the third important lesson I learned as I was writing Eddie’s Bastard: even when you’re sick to death of your story, keep telling it–because no one else will.

Eventually, I finished the book, found an agent, and got it published. Maybe I would have finished it without Jack’s help, but it probably never would have seen the light of day. Among the many debts of gratitude I owe Jack, who died in 2000, is that his advice allowed me to make a quantum leap forward in my development as a writer. Having now just finished my fifth novel, I can attest to the fact that even though the rules change slightly from book to book, the game remains the same. I’ve never been able to improve on the Right-Foot Rule. It, and a handful of others, continues to be my professional code.

If you enjoyed this article, check out my FREE book, How to Write a Novel: Notes on the Creative Craft.