Note: This entry is not intended to be a work of literary criticism, but rather to make brief notes about books I’ve read recently and enjoyed. Publishers and authors, please be aware that no comments made on this page may be used as blurb or promotional copy without my express written consent.

Love And Summer by William Trevor
My friend Frederick, who is one-half of the ownership at The Biscuit Eater here in Mahone Bay, insisted I read this book. I trust Frederick’s judgment, so I did, and I was glad. I was impressed by the pacing, which is decidedly not for the internet generation. It’s a book for people who like to take their time reading about people who take their time living, and it’s set in a time (the 1950s) and a place (a small town in Ireland) where things naturally move a lot slower than they do today.

The story concerns a love affair between an eccentric bachelor and a married woman, and it flows very nicely. Trevor is a fine writer, and this is a gentle book with sharply-realized characters. I was left with the impression that not a lot had happened, but then I realized the internet has already warped me enough that I’m beginning to lose my ability to appreciate subtlety. This is clearly my loss, but unfortunately my loss is, in a broader sense, also Mr. Trevor’s loss. By this I mean that people in droves are probably losing the ability to appreciate books like this one. In another generation I fear writers like him won’t exist, except in isolated pockets with no high-speed connection. Keep writing, please, Mr. Trevor, in the name of all that is good and peaceful and quiet about Ireland. 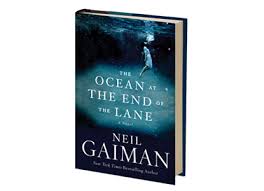 The Ocean At The End Of The Lane by Neil Gaiman
The reviews I read of this book had me convinced that it was going to be the best book I ever read, possibly to a life-changing extent. I shouldn’t have read those reviews. Normally I never read book reviews before I read the book itself, but everyone was raving about it so loudly I couldn’t help myself.

I thought it was a good book. It did not change my life. The hyperbole didn’t match the experience, but that has nothing whatsoever to do with Mr. Gaiman or his considerable abilities. The story reminded me of the kinds of books I loved to read when I was a boy, which were stories about young boys to whom fantastical things happen in the midst of some mundane experience. I was a great reader of fantasy as a child. Gaiman succeeded in recapturing for me the excitement that comes from believing that ordinary reality can be intentionally ruptured by special people with special powers, and that normal people such as myself can walk through the resulting rift because of some special quality I didn’t previously know I possessed, which makes me kin to those special people myself. That, in a nutshell, is the secret to the success of books in this genre, from The Chronicles of Narnia to that English wizard fellow. Gaiman has it down.

The Childhood Of Jesus by J.M. Coetzee
The first thing I tell everyone about this book is that it is not actually about the childhood of Jesus, although you might be forgiven for thinking that. It’s about the relationship between a man and a boy who is not his son, as they struggle to adjust to life as resettled refugees in an unnamed (but Spanish-speaking) country.

The second thing I say to everyone is that of all the books I’ve read in the past several years, this is the one I would most like to discuss with someone over a seminar table. It’s very thought-provoking, which is a quality lacking in many novels these days. Coetzee is one of those writers who is truly transmitting messages from another realm. This is, in itself, not so rare; what makes him rare is that those messages are not garbled nonsense, but are worth listening to. I am grateful to him for taking that kind of risk. He reminds me that writing at its best has a far higher purpose than selling books.

The Circus by Nigel West
This book is non-fiction, and it was published in 1983. I found it at the Biscuit Eater and snapped it up because I happened to be researching Cold War intelligence for a project I’m working on. It’s a history of MI5 operations from 1945-1972. I love stuff like this, and I probably would have bought it even if I hadn’t needed it for research. I was pleasantly surprised by two literary revelations, too. I learned that after World War II, P.G. Wodehouse came to live in the the US in a state of disgrace because of a series of talks he had given over German radio while he was under house arrest in France. Some people saw this as evidence of collaboration, although in my opinion he was probably just trying to save his own neck. In any case, he never returned to England.

The second literary tidbit I gleaned from this book was that Benjamin Greene, the brother of Graham Greene, was arrested in 1941 on the basis of false testimony given by a fellow named Harald Kurtz, a nephew of Queen Mary. Kurtz was a German refugee who pretended to be a Nazi sympathizer and ratted out those he found to MI5 in exchange for cash. He falsely accused Benjamin Greene, and it took his family a great deal of time and effort to get him released and the charges dropped. Greene later named his villain in The Third Man after Kurtz. Kurtz himself became a successful writer of biographies.

A Delicate Truth by John Le CarrÃ©
A beautifully crafted book by an author who at age 81 appears to be at the height of his powers. I have been a le CarrÃ© fan for decades. What I love about him is that he writes literary fiction with strong action. Imagine! I wonder if that will ever take off as a trend. God, I hope so. It was recently said of le CarrÃ© that he deserves a Nobel for his body of work; in this Guardian review Mark Lawson says that le CarrÃ© is the most influential living British novelist. I can say sans doute that he has certainly influenced me.